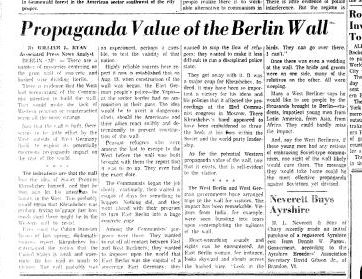 In August of 1961 the east German government closed the border between the east and west sectors of Berlin by building the infamous Berlin Wall. It became the symbol of the Cold War. The Plattsburgh-Press Republican discusses the propagandic value the wall held. To read the article from October 23, 1961, click here.