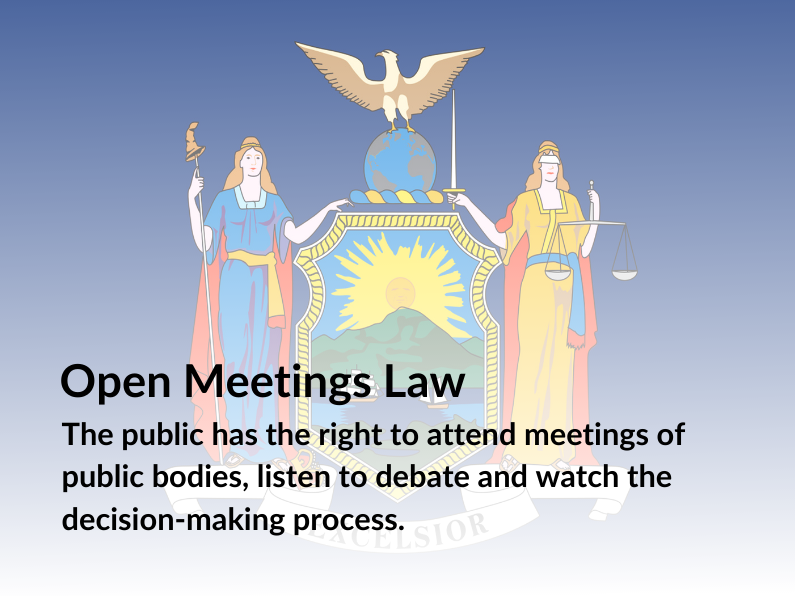 Legislation (S.50001/A.40001) Allows New Yorkers to Participate in State and Local Government Meetings Virtually to Reduce the Risk of COVID-19 Spread; Helps People with Disabilities Participate in Their Government

Early this month, Governor Kathy Hochul signed legislation (S.50001/A.40001) extending virtual access to public meetings under New York State’s Open Meetings Law, which allows New Yorkers to virtually participate in local government meetings during the COVID-19 pandemic. The legislation, which was initially implemented by Executive Order during last year’s State of Emergency, allows state and local government meetings that are normally held in-person to be held remotely instead, as long as the public has the ability to view or listen to the meeting and as long as the meeting is recorded and later transcribed. This statutory change will reduce the need for congregation at public meetings while the Delta variant is prevalent while ensuring public business can continue.

Meetings can be held either over a video service such as Zoom or by phone. There is no change to the requirement that Public Bodies must provide notice to constituents that a meeting is taking place, and they are required to inform constituents how to access the public meeting virtually.

Unlike during the State of Emergency, which expired on June 25, 2021, when in-person public meetings were prohibited by the Executive Order banning large public gatherings, this new legislation gives public bodies the option of holding meetings in-person or virtually. However, because of the temporary nature of the law, they will only have that option until January 15, 2022, which is the date when the new law is set to expire.